“In this remarkably candid memoir of crippling alcoholism, cardiologist Ameisen’s passion for curing addiction is palpable, at times gritty, and, in the end, hopeful.”

— Booklist on The End of My Addiction 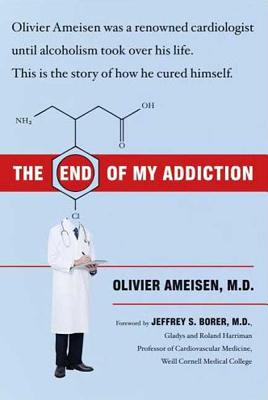 The End of My Addiction

Dr. Olivier Ameisen was a brilliant cardiologist on the staff at one of America’s top teaching hospitals and running his own successful practice when he developed a profound addiction to alcohol. He broke bones with no memory of falling; he nearly lost his kidneys; he almost died from massive seizures during acute withdrawal. He gave up his flourishing practice and, fearing for his life, immersed himself in Alcoholics Anonymous, rehab, therapy, and a variety of medications. Nothing worked.

So he did the only thing he could: he took his treatment into his own hands. Searching for a cure for his deadly disease, he happened upon baclofen, a muscle relaxant that had been used safely for years as a treatment for various types of muscle spasticity, but had more recently shown promising results in studies with laboratory animals addicted to a wide variety of substances. Dr. Ameisen prescribed himself the drug and experimented with increasingly higher dosages until he finally reached a level high enough to leave him free of any craving for alcohol. That was more than five years ago.

Alcoholism claims three hundred lives per day in the United States alone; one in four U.S. deaths is attributable to alcohol, tobacco, or illegal drugs. Baclofen, as prescribed under a doctor’s care, could possibly free many addicts from tragic and debilitating illness. But as long as the medical and research establishments continue to ignore a cure for one of the most deadly diseases in the world, we won’t be able to understand baclofen’s full addiction-treatment potential.

The End of My Addiction is both a memoir of Dr. Ameisen’s own struggle and a groundbreaking call to action—an urgent plea for research that can rescue millions from the scourge of addiction and spare their loved ones the collateral damage of the disease