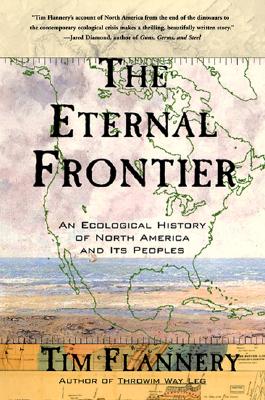 In The Eternal Frontier, world-renowned scientist and historian Tim Flannery tells the unforgettable story of the geological and biological evolution of the North American continent, from the time of the asteroid strike that ended the age of dinosaurs 65 million years ago, to the present day. Flannery describes the development of North America’s deciduous forests and other flora, and tracks the immigration and emigration of various animals to and from Europe, Asia, and South America, showing how plant and animal species have either adapted or become extinct. The story takes in the massive changes wrought by the ice ages and the coming of the Indians, and continues right up to the present, covering the deforestation of the Northeast, the decimation of the buffalo, and other facets of the enormous impact of frontier settlement and the development of the industrial might of the United States. Natural history on a monumental scale, The Eternal Frontier contains an enormous wealth of fascinating scientific details, and Flannery’s accessible and dynamic writing makes the book a delight to read. This is science writing at its very best—a riveting page-turner that is simultaneously an accessible and scholarly trove of incredible information that is already being hailed by critics as a classic.

Prev: The Essential Charlotte
Next: The Eternal Wonder