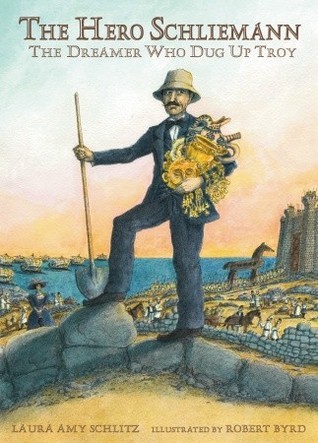 The Dreamer Who Dug For Troy

Archaeologist? Mythmaker? Crook? This engaging, illustrated biography of Heinrich Schliemann — a nineteenth-century romantic who most believe did find the ancient city of Troy — reveals him to be a fascinating mixture of all three.

From the time Heinrich Schliemann was a boy — or so he said — he knew he was destined to dig for lost cities and find buried treasure. And if Schliemann had his way, history books would honor him to this day as one of the greatest archaeologists who ever lived. But a little digging into the life of Schliemann himself reveals that this nineteenth-century self-made man had a funny habit of taking liberties with the truth. Like the famous character of his hero, the poet Homer, Schliemann was a crafty fellow and an inventor of stories, a traveler who had been shipwrecked and stranded and somehow survived. And Heinrich Schliemann was determined to become a legend like Homer — but in his own time.

Following this larger-than-life character from his poor childhood in Germany to his achievement of wealth as a merchant in Russia, from his first haphazard dig for the city of Ilium to his final years living in a pseudo “Palace of Troy,” this engrossing tale paints a portrait of contradictions— a man at once stingy and lavishly generous, a scholar both shrewd and reckless, a speaker of twenty-two languages and a health fanatic addicted to cold sea baths. Laura Amy Schlitz weaves historical facts among Schliemann’s fanciful recollections, while Robert Byrd’s illustrations evoke his life and times in wonderful detail. Along the way,
THE HERO SCHLIEMANN gives young readers food for discussion about how history sometimes comes to be written — and how it sometimes needs to be changed.

Prev: The Heretic Queen
Next: The Heyday of the Insensitive Bastards