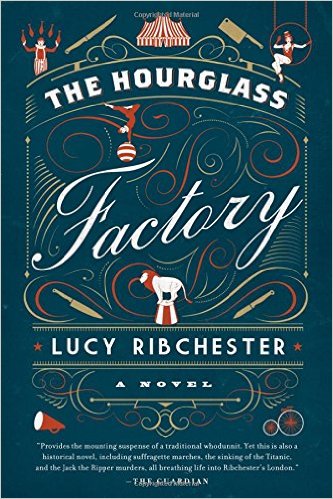 Amid the drama of the suffragette movement in Edwardian London, the disappearance of a famous trapeze artist in the middle of her act leads a young Fleet Street reporter to an underworld of circus performers, fetishists, and society columnists.

The suffragette movement is reaching a fever pitch, and Inspector Frederick Primrose is hunting a murderer on his beat. Across town, Fleet Street reporter Frances “Frankie” George is chasing an interview with trapeze artist Ebony Diamond. Frankie finds herself fascinated by the tightly-laced acrobat and follows her to a Bond Street corset shop that seems to be hiding secrets of its own. When Ebony Diamond mysteriously disappears in the middle of a performance, Frankie and Primrose are both drawn into the shadowy world of a secret society with ties to both London’s criminal underworld and its glittering socialites.

How did Ebony vanish, who was she afraid of, and what goes on behind the doors of the mysterious Hourglass Factory? From newsrooms to the drawing rooms of high society, the investigation leads Frankie and Primrose to a murderous villain with a plot more deadly than anyone could have imagined.

Prev: The Hot Topic
Next: The House of Fame