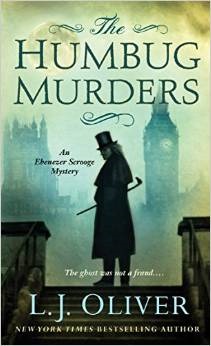 Ebenezer Scrooge from Charles Dickens’s A Christmas Carol investigates a shocking murder—before he becomes the next victim—in this playful mystery in a new series from a New York Times bestselling author.

Scrooge considers himself a rational man with a keen sense of deductive reasoning developed from years of business dealings. But that changes one night when he’s visited by the ghost of his former boss and friend, Fezziwig, who mysteriously warns him that three more will die, and ultimately Ebenezer himself—if he doesn’t get to the bottom of a vast conspiracy.

When he wakes the next day, Scrooge discovers that not only is Fezziwig dead, but he’s under arrest as all evidence points toward himself: Scrooge’s calling card was found in the cold, dead hand of Fezziwig’s body, and someone scribbled “HUMBUG” in blood on the floor nearby.

Now, Scrooge must race against the pocket watch to clear his name, protect his interests, and find out who killed his last true friend—before the “Humbug Killer” strikes again. Joining Scrooge in his adventures is a spunky sidekick named Adelaide, who matches his wits at every turn, plus the Artful Dodger, Fagin, Belle, Pickwick, and even Charles Dickens himself as a reporter dealing in the lurid details of London’s alleyway crimes.

Full of action and wry humor, The Humbug Murders is a fun take on a classic character—Scrooge as you’ve never seen him before.

Prev: The Human, the Orchid, and the Octopus
Next: The Hundred Years' War on Palestine