— The New York Times on The Inheritance 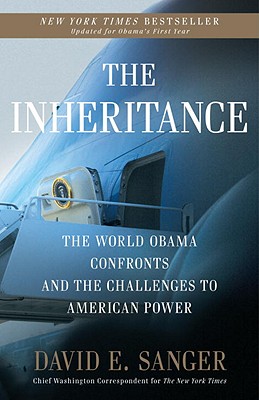 Readers of The New York Times know David Sanger as one of the most trusted correspondents in Washington, one to whom presidents, secretaries of state, and foreign leaders talk with unusual candor. Now, with a historian’s sweep and an insider’s eye for telling detail, Sanger delivers an urgent intelligence briefing on the world America faces.

In a riveting narrative, The Inheritance describes the huge costs of distraction and lost opportunities at home and abroad as Iraq soaked up manpower, money, and intelligence capabilities. The 2008 market collapse further undermined American leadership, leaving the new president with a set of challenges unparalleled since Franklin D. Roosevelt entered the Oval Office.

Sanger takes readers into the White House Situation Room to reveal how Washington penetrated Tehran’s nuclear secrets, leading President Bush, in his last year, to secretly step up covert actions in a desperate effort to delay an Iranian bomb. Meanwhile, his intelligence chiefs made repeated secret missions to Pakistan as they tried to stem a growing insurgency and cope with an ally who was also aiding the enemy–while receiving billions in American military aid. Now the new president faces critical choices: Is it better to learn to live with a nuclear Iran or risk overt or covert confrontation? Is it worth sending U.S. forces deep into Pakistani territory at the risk of undermining an unstable Pakistani government sitting on a nuclear arsenal? It is a race against time and against a new effort by Islamic extremists–never before disclosed–to quietly infiltrate Pakistan’s nuclear weapons program.

“Bush wrote a lot of checks,” one senior intelligence official told Sanger, “that the next president is going to have to cash.”

The Inheritance takes readers to Afghanistan, where Bush never delivered on his promises for a Marshall Plan to rebuild the country, paving the way for the Taliban’s return. It examines the chilling calculus of North Korea’s Kim Jong-Il, who built actual weapons of mass destruction in the same months that the Bush administration pursued phantoms in Iraq, then sold his nuclear technology in the Middle East in an operation the American intelligence apparatus missed. And it explores how China became one of the real winners of the Iraq war, using the past eight years to expand its influence in Asia, and lock up oil supplies in Africa while Washington was bogged down in the Middle East. Yet Sanger, a former foreign correspondent in Asia, sees enormous potential for the next administration to forge a partnership with Beijing on energy and the environment.

At once a secret history of our foreign policy misadventures and a lucid explanation of the opportunities they create, The Inheritance is vital reading for anyone trying to understand the extraordinary challenges that lie ahead.

Prev: The Information: A History, A Theory, A Flood
Next: The Inheritance of Loss