“Benedict's brilliant and compassionate reporting is neither left nor right—it's human. . . . You know these women—they are your mother, sister, cousin, daughter. Their stories of injustice in the U.S. military will tear your guts out.”

— Dale Maharidge author of the Pulitzer Prize-winning And Their Children after Them on The Lonely Soldier: The Private War of Women Serving in Iraq 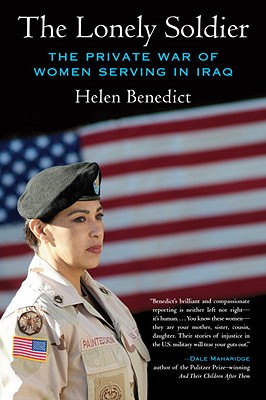 The Lonely Soldier: The Private War of Women Serving in Iraq

More American women have fought and died in Iraq than in any war since World War Two, yet as soldiers they are still painfully alone. In Iraq, only one in ten troops is a woman, and she often serves in a unit with few other women or none at all. This isolation, along with the military’s deep-seated hostility toward women, causes problems that many female soldiers find as hard to cope with as war itself: degradation, sexual persecution by their comrades, and loneliness, instead of the camaraderie that every soldier depends on for comfort and survival. As one female soldier said, “I ended up waging my own war against an enemy dressed in the same uniform as mine.”

In The Lonely Soldier, Benedict tells the stories of five women who fought in Iraq between 2003 and 2006. She follows them from their childhoods to their enlistments, then takes them through their training, to war and home again, all the while setting the war’s events in context.

Prev: The Living Reed
Next: The Long Night