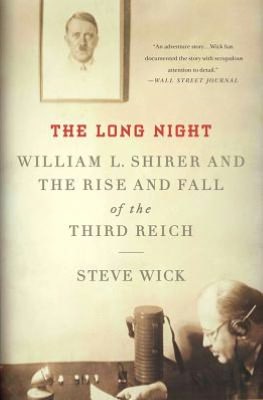 The story of legendary American journalist William L. Shirer and how his first-hand reporting on the rise of the Nazis and on World War II brought the devastation alive for millions of Americans.

William L. Shirer and the Rise and Fall of the Third Reich

When William L. Shirer started up the Berlin bureau of Edward R. Murrow’s CBS News in the 1930s, he quickly became the most trusted reporter in all of Europe. Shirer hit the streets to talk to both the everyman and the disenfranchised, yet he gained the trust of the Nazi elite and through these contacts obtained a unique perspective of the party’s rise to power.

Unlike some of his esteemed colleagues, he did not fall for Nazi propaganda and warned early of the consequences if the Third Reich was not stopped. When the Germans swept into Austria in 1938 Shirer was the only American reporter in Vienna, and he broadcast an eyewitness account of the annexation. In 1940 he was embedded with the invading German army as it stormed into France and occupied Paris. The Nazis insisted that the armistice be reported through their channels, yet Shirer managed to circumvent the German censors and again provided the only live eyewitness account. His notoriety grew inside the Gestapo, who began to build a charge of espionage against him. His life at risk, Shirer had to escape from Berlin early in the war. When he returned in 1946 to cover the Nuremberg trials, Shirer had seen the full arc of the Nazi menace. It was that experience that inspired him to write The Rise and Fall of the Third Reich—the magisterial, definitive history of the most brutal ten years the modern world had known—which has sold millions of copies and has become a classic.

Drawing on never-before-seen journals and letters from Shirer’s time in Germany, award-winning reporter Steve Wick brings to life the maverick journalist as he watched history unfold and first shared it with the world.

Prev: The Lonely Soldier: The Private War of Women Serving in Iraq
Next: The Long Weekend