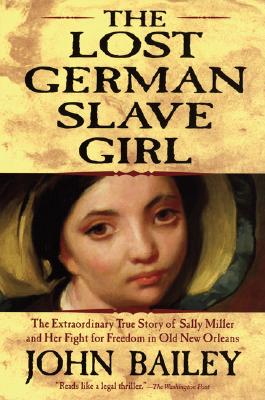 It is a spring morning in New Orleans, 1843. In the Spanish Quarter, on a street lined with flophouses and gambling dens, Madame Carl recognizes a face from her past. It is the face of a German girl, Sally Miller, who disappeared twenty-five years earlier. But the young woman is property, the slave of a nearby cabaret owner. She has no memory of a “white” past. Yet her resemblance to her mother is striking, and she bears two telltale birthmarks. In brilliant novelistic detail, award-winning historian John Bailey reconstructs the exotic sights, sounds, and smells of mid-nineteenth-century New Orleans, as well as the incredible twists and turns of Sally Miller’s celebrated and sensational case. Did Miller, as her relatives sought to prove, arrive from Germany under perilous circumstances as an indentured servant or was she, as her master claimed, part African, and a slave for life? A tour de force of investigative history that reads like a suspense novel, The Lost German Slave Girl is a fascinating exploration of slavery and its laws, a brilliant reconstruction of mid-nineteenth-century New Orleans, and a riveting courtroom drama. It is also an unforgettable portrait of a young woman in pursuit of freedom.