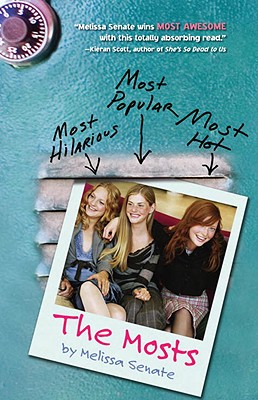 Madeline finished freshman year at Freeport Academy just as invisible as when she started. But after a summer in Italy with her sophisticated aunt, she returned as a sophomore with cool clothes, European attitude, and a hot new boyfriend, Thom.

Maddie’s part of the in crowd . . . the Mosts. Her best friend, Caro? Most Beautiful. Her other friends, Fergie, Annie, and Selena? Most Stylish, Most Hilarious, and Most Hot, respectively. And Madeline? Most Popular. Her life is great.

Now Thom’s moved to California,so Maddie’s no longer the girlfriend of a popular guy. The guy Caro likes only has eyes for Madeline,can you say social suicide? And a group of misfits at school are begging Madeline to help make them over.

Madeline knows there’s a fine line between being a Most . . . and being a Not. She doesn’t want her status to change . . . but what if she doesn’t have a choice?

Fun summer fiction from Melissa Senate, The Mosts is sure to be a favorite among tweens and teens looking for a great beach read.

Prev: The Most Dangerous Man in America
Next: The Mother