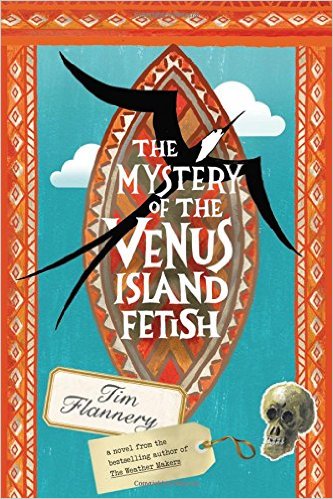 Tim Flannery's The Mystery of the Venus Island Fetish is a delightfully risqué caper, full of eccentric characters, intrigue, and adventure.

The Mystery of the Venus Island Fetish

It’s 1932, and the Great Venus Island Fetish, a ceremonial mask surrounded by thirty-two human skulls, now resides in a museum in Sydney, Australia. But young anthropologist Archie Meek, recently returned from an extended field trip to Venus Island, has noticed something amiss: a strange discoloration on some of the skulls.

Has someone tampered with the fetish? Is there a link between it and the mysterious disappearance of Cecil Polkinghorne, curator of archaeology? And how did Eric Sopwith, retired mollusks expert, die in the museum’s storeroom? Could Archie’s life be at risk as well?

But these are not the only concerns that weigh upon the assistant curator’s mind. Why hasn’t his beloved Beatrice―registrar, anthropology―accepted his proposal of marriage and the love token he brought back from Venus Island? Has something been lost in translation?

Tim Flannery’s The Mystery of the Venus Island Fetish is a delightfully risqué caper, full of eccentric characters, intrigue, and adventure.

Prev: The Mustangers
Next: The Myth of the Strong Leader