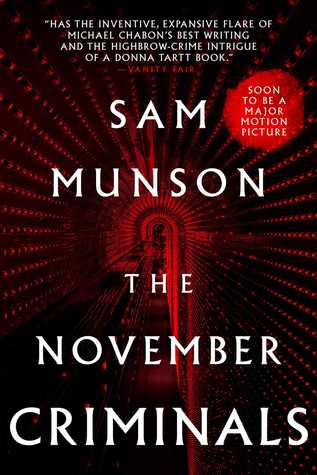 For a high school senior, Addison Schacht has a lot of preoccupations. Like getting into college. Selling drugs to his classmates. His complicated relationship with his best friend (NOT his girlfriend) Digger. And he’s just added another to the list: the murder of his classmate Kevin Broadus, and his own absurd, obsessive plan to investigate the death. When presented with an essay question on his application to the University of Chicago—What are your best and worst qualities?—Addison finds himself provoked into giving his final, unapologetic say about all of the above and more.

Addison Schacht finds good company among American literature’s cadre of unsettled, restless youth, from Huck Finn to Holden Caulfield. The November Criminals takes on the terrain of the classic adolescent truth-telling novel and—with nerve and erudition—carves out its own unique territory.

Prev: The Nostradamus Prophecies
Next: The Numbers Game