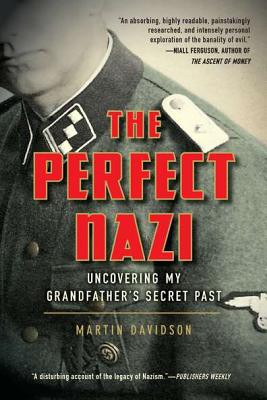 What if you found out that your grandfather had been a Nazi SS officer?

This is the confession that Martin Davidson received from his mother upon the death of demanding, magnetic grandfather Bruno Langbehn. The Perfect Nazi is Davidson’s exploration of his family’s darkest secret.

As Davidson dove into his research, drawing on an astonishing cache of personal documents as well as eyewitness accounts of this historical period, he learned that Bruno’s story moved lock-step in time with the rise and fall of the Nazi party: from his upbringing in a fiercely military environment amid the aftermath of World War I, to his joining the Nazi party in 1926 at the age of nineteen, more than six years before Hitler came to power, to his postwar involvement with the Werewolves, the gang of SS stalwarts who vowed to keep on after the defeat of Nazism.

Davidson realized that his grandfather was in many ways the “perfect Nazi,” his individual experiences emblematic of the generation of Germans who would plunge the world into such darkness. But he also realized that every fact he uncovered was a terrible truth he himself would have to come to terms with…