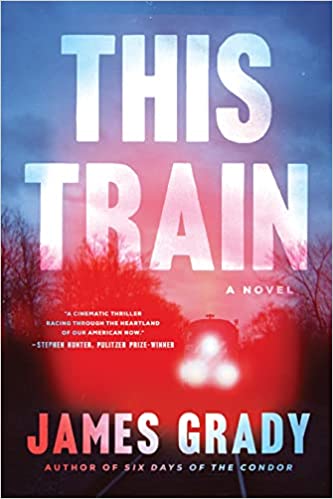 The new novel from the acclaimed author of Six Days of the Condor—set on a heart-pounding cross-country train ride. "Grady's style is loose, colorful, challenging and fun. I sometimes thought of Orwell’s novel 1984, sometimes of the Dylan song 'Des

This Train races us through America’s heartland, carrying secrets. There is treasure in the cargo car, along with an invisible puppeteer. There is a coder named Nora, Mugzy, the yippy dog, and Ross, the too-curious poet. On board, it’s a countdown to murder…

On this train there is a silver madman, a targeted banker, and crises of conscience. This train harbors the “perfect” couple’s conspiracies, the chaos of being a teenager, and parenthood alongside the wows of being nine. There is a widow and a wannabe, and the sleaziest billionaire.

On this train, there is the suicide ticket, the bomb, sex, love, and loneliness. The heist. Revenge. Redemption.

This Train is a ticking clock, roaring through forty-seven fictional hours of non-stop suspense and action, through the challenges of now: Racism. Sexism. Global warming. What it means to be alive.

This train carries all of us. All aboard!

Prev: This Song Will Save Your Life
Next: This Vacant Paradise