“Three Ways to Capsize a Boat”

— is a charming and lyrical read awash with the joy of discovery and Stewart is an immensely likeable narrator…The key to his popularity is his honest and self-effacing determination - as discussed during a mid-Atlantic storm - to live a rewarding life. on Three Ways To Capsize a Boat 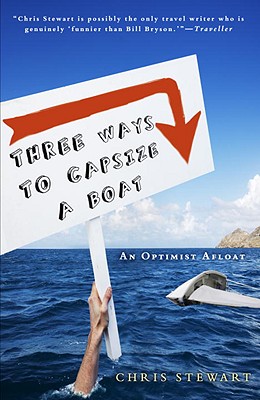 Three Ways To Capsize a Boat

Chris Stewart had a long and eclectic list of jobs. From some of the most glamorous careers – he was original drummer in Genesis - to the more offbeat - a sheep shearer and circus performer - he had done it all…or almost all. So when he is offered the chance to captain a sailboat in the Greek islands one summer, something he had never done before, he jumps at the chance. Ever the optimist, Stewart is undaunted by the fact that he’d never actually sailed before!

So begins the hilarious and wild adventures of Three Ways to Capsize a Boat. From setting the boat on fire not once, but several times in the Aegean Sea to his not-so-grand arrival in Spetses to meet the owners of the boat (who says it isn’t graceful to plow into the docks as a means of coming to a stop?), Stewart quickly catches the sailing bug. By the end of the summer, as he is facing the dreary prospect of going back to sheep shearing, he jumps at the chance to be part of a crew to follow Viking Leif Eiriksson’s historic journey across the Atlantic Ocean. Five months on a small sailboat with seven other people in the freezing waters of the Atlantic would sound like punishment to most people, but not Stewart! He takes it all in stride and always with his unfailing optimism and good spirits. From coming to terms with the long, cold nights at sea and unchanging cuisine to battling intense seasickness and managing to go to the bathroom during a massive storm (a lot harder than you’d think!), Stewart keeps his good humor…but learns, in the end, that perhaps the best things in life are worth coming ashore for.