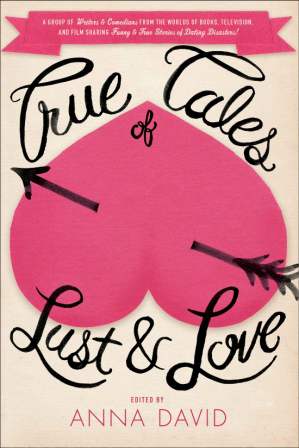 True Tales of Lust and Love

Anna David’s True Tales of Lust and Love began as a one-time-only reading and storytelling show in January of 2012, a venue for writers and comedians to share and laugh at their dating disaster stories. But after selling out the venue and attracting immediate press and buzz—with articles in The LA Weekly, LA Times, Time Out, Flavorpill, and LAist, among others—David agreed to produce the show every month. It has continued not only to sell out but also to attract a growing list of authors, comedians, and Hollywood writers. As Time Out declared, “This is the place to go to see strong female performers.”

With the show now booked indefinitely, and with audio recordings of each performance available on iTunes, Anna has collected the most popular and entertaining pieces into the first ever True Tales of Lust and Love anthology. The book includes essays organized into three sections—Casual Sex, Dating, and Out of the Ordinary—which collectively offer up funny, raucous, insightful, and surprisingly touching confessions about the quest for lust and love. Everyone has dating disaster stories, everyone needs to share and laugh at them, and this anthology will give readers the opportunity to do just that, with contributions from the funniest writers and comedians around, pulled from the world of books, TV, and film. True Tales of Lust and Love is the perfect complement for a funny or cynical Valentine’s Day—and beyond.

Prev: True Style is What's Underneath
Next: Truth