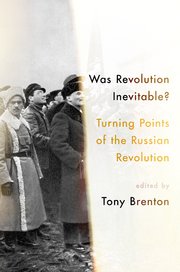 Turning Points of the Russian Revolution

Communism’s rise and eventual fall in Eastern Europe is one of the great stories of the 20th century. Within this context, the Russian Revolution’s role and legacy overshadows all else. In Was Revolution Inevitable?, former British Ambassador to Russia Sir Tony Brenton has gathered essays by leading historians to trace the events that led to the overthrow of the Tsarist regime and to pinpoint moments when those events could have unfolded in a drastically different way. What would the world be like had Fanny Kaplan succeeded in assassinating Vladimir Lenin in 1918? What if the Bolsheviks had never imposed the brutal “War Communism” initiatives that devastated the Russian peasants? What if Rasputin had talked Nicholas II out of involvement in World War One, which effectively led to the Revolution and sealed the demise of the Romanov dynasty?

Preeminent scholars, including Orlando Figes, Richard Pipes, Douglas Smith, and Martin Sixsmith, ruminate on these questions and many others, assembling a series of pivotal moments that reveal what might have gone differently, and, if so, what the repercussions would have been. The contributors take a variety of approaches, from imagining an alternate history, to carefully studying a precarious moment of contingency, to disproving popular imagined alternatives. All of the chapters, however, shed light on Lenin’s rise to power and the proliferation of his agenda, while assessing the influence of the revolution’s pivotal moments on Russian-and global-politics.

Provocative and illuminating, Was Revolution Inevitable? provides an in-depth exploration of the conflict that for nearly a century has shaped world history. The Russian Revolution put totalitarian communism into power, fueled Nazism and the Second World War, and forged one of the West’s greatest antagonists. Here is a book that scrutinizes how the past, present, and future of global history could have been remarkably different had the events of 1917 unfolded differently and in the process deepens our understanding of what did happen and why.

Prev: War Stories
Next: Was the Cat in the Hat Black?