“A fun read! It's easy to flip a few pages to find another fascinating peek into the 20th century.”

— San Francisco Chronicle on We Were There 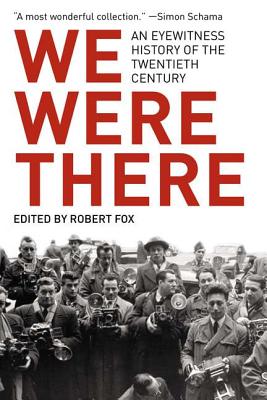 Covering two world wars, revolutions, discoveries and the rise and fall of empires across the globe, We Were There reports on the defining moments of the last hundred years, from the turn of the last century through the Wall Street Crash and D-Day, to the Vietnam War, Tiananmen Square and 9/11. In a period of vast technological advancement that has given birth to mass-circulation newspapers, television and the Internet, these evocative reports from around the world prove that the art of eyewitness reporting is as gripping and as valuable as ever.

We Were There includes not only some of the best journalism of the last century but also the private confidence of diaries and letters. Each selection from sources as diverse as Ernest Hemingway, Neil Armstrong, Woody Gurthrie, James Cameron and Hunter S. Thompson, is preceded by a brief introduction that illuminates the passage’s historical context and introduces the author.

Prev: We Were Promised Spotlights
Next: We're Not in Kansas Anymore