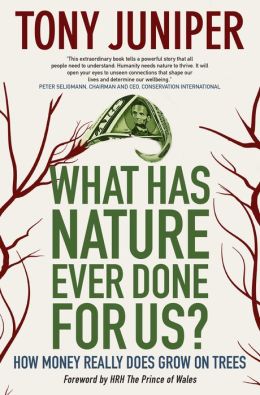 What Has Nature Ever Done for Us?

How Money Really Does Grow On Trees

During recent years, and since 2005 in particular, the environmental debate worldwide has been dominated by climate change, carbon emissions and efforts to achieve low carbon economies. But a number of academic, technical, political, business and NGO initiatives indicate that there is a new wave of environmental attention focused on a wholly different set of subjects: namely that of ‘natural capital,’ ‘ecosystem services’ and ‘biodiversity,’ or in other words, what Nature does for us. From Indian Vultures to Chinese bees and from recycling miracles in the soil to the abundant genetic codebook underpinning our food and pharmaceutical needs, Nature provides the ‘ecosystem services’ that underlie our economies. It is been estimated that these and other services are worth about twice the global GDP, and yet we take most of these services for granted, imagining them free and limitless- until they suddenly switch off. This is a book full of immediate, impactful stories, containing warnings, such as the rabies epidemic that followed a disappearance of Indian vultures (hormones in cattle killed the birds and resulted surplus in carcasses, creating an explosion of wild dogs), as well as promising and enlightening tales of how birds protect fruit harvests, coral reefs shield coasts from storms and how the rainforests absorb billions of tons of carbon released from automobiles and power stations. Tony Juniper’s book will change the whole way you think about life, the planet and the economy.

Prev: What Has Nature Ever Done for Us?
Next: What Just Happened