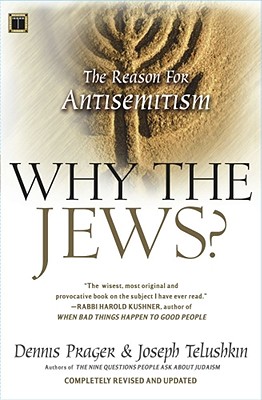 Why the Jews? The Reason for Antisemitism

From the bestselling authors of The Nine Questions People Ask About Judaism comes a completely revised and updated edition of a modern classic that reflects the dangerous rise in antisemitism during the twenty-first century.

The very word Jew continues to arouse passions as does no other religious, national, or political name. Why have Jews been the object of the most enduring and universal hatred in history? Why did Hitler consider murdering Jews more important than winning World War II? Why has the United Nations devoted more time to tiny Israel than to any other nation on earth?

In this seminal study, Dennis Prager and Joseph Telushkin attempt to uncover and understand the roots of antisemitism—from the ancient world to the Holocaust to the current crisis in the Middle East. This postmillennial edition of Why the Jews? offers new insights and unparalleled perspectives on some of the most recent, pressing developments in the contemporary world, including:

The replicating of Nazi antisemitism in the Arab world

The pervasive anti-Zionism/antisemitism on university campuses

The rise of antisemitism in Europe

Clear, persuasive, and thought provoking, Why the Jews? is must reading for anyone who seeks to understand the unique role of the Jews in human history.

Prev: Why Our Health Matters
Next: Wild Nights