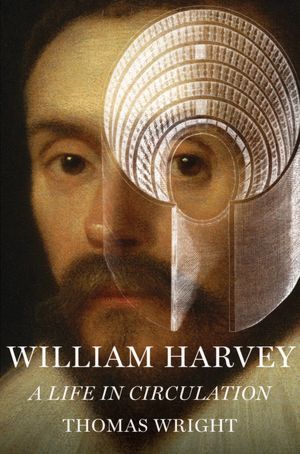 A Life in Circulation

In 1628, the English physician William Harvey published his revolutionary theory of blood circulation. Offering a radical conception of the workings of the human body and the function of the heart, Harvey’s theory overthrew centuries of anatomical and physiological orthodoxy and had profound consequences for the history of science. It also had an enormous impact on culture more generally, influencing economists, poets and political thinkers, for whom the theory triumphed not as empirical fact but as a remarkable philosophical idea.

In the first major biographical study of Harvey in 50 years, Thomas Wright charts the meteoric rise of a yeoman’s son to the elevated position of King Charles I’s physician, taking the reader from farmlands of Kent to England’s royal palaces, and paints a vivid portrait of an extraordinary mind formed at a fertile time in England’s intellectual history. Set in late Renaissance London, the book features an illustrious cast of historical characters, from Francis Bacon and John Donne to Robert Fludd, whose corroboration of Harvey’s ideas helped launch his circulation theory. After he published his discoveries, Harvey became famous throughout Europe, where he demonstrated his theory through public vivisections. Although his ideas met with vociferous opposition, they eventually triumphed and Harvey became renowned as the only man in the history of natural philosophy to live to see a revolutionary theory gain wide currency. But just as intellectual ideas could be toppled, so too could kings. When Charles I was overthrown during the Civil War of the 1640s, his loyal court physician fell also, and Harvey, an unrepentant Royalist, was banished from London under the English Republic. He died in the late 1650s, a gout-ridden, melancholy man, uncertain of his achievement.

A victim of the political turmoil of the times, William Harvey was nevertheless the mainspring of vast historical changes in anatomy and physiology. Wright’s biography skillfully repositions Harvey as a man who embodied the intellectual and cultural spirit of his age, and launched a revolution that would continue to run its course long after his death.

Prev: Will the Real John Callahan Please Stand Up?
Next: Willoughbyland