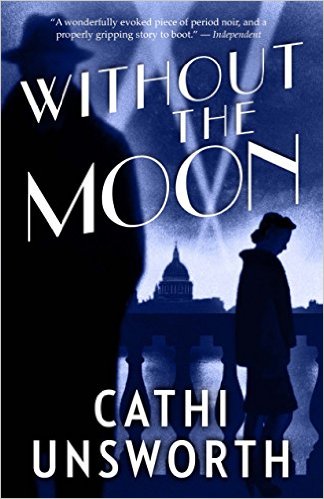 Without the Moon is an atmospheric and evocative historical crime novel demonstrating Unsworth’s masterful grasp of the genre.

London during the long, dark days of the Blitz: a city outwardly in ruins, weakened by exhaustion and rationing. But behind the blackout, the old way of life continues: in the music halls, pubs, and cafés, soldiers mix with petty crooks, stage magicians with lonely wives, scandal-hungry reporters with good-time girls — and DCI Edward Greenaway keeps a careful eye on everyone.

But out on the streets, something nastier is stirring: London’s prostitutes are being murdered, their bodies left mutilated to taunt the police. And in the shadows Greenaway’s old adversaries in organized crime are active again, lured by rich pickings on the black market. As he follows a bloody trail through backstreets and boudoirs, Greenaway must use all his skill — and everything he knows about the city’s underworld — to stop the slaughter.

Based on real events, Without the Moon is an atmospheric and evocative historical crime novel demonstrating Unsworth’s masterful grasp of the genre.

Prev: Within These Walls
Next: Witness