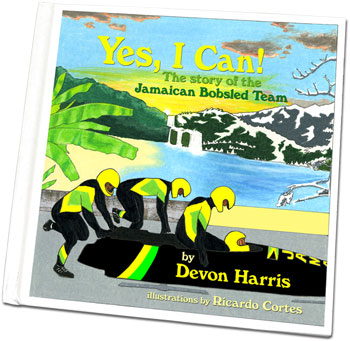 The Story of the Jamaican Bobsled Team

The story of the original Jamaican Bobsled Team is one about having the courage to pursue your dreams, persevering in the face of all difficulties and defining success in your own terms. When Devon Harris, Michael White, Dudley Stokes and Christian Stokes decided to follow their dreams to the Olympics they knew nothing about their sport and had only a few months to get ready. Ice? They didn’t have any. Jamaica is a tropical island famous for sun ,sea and surf, Support? They didn’t have any. Many people laughed at them and thought they were a joke. Money? They didn’t have any . They sold T-shirts to raise the funds they needed. Equipment? They didn’t have any. They rented an old inferior sled in order to compete Olympic dreams die hard. With dogged determination and a belief in themselves and each other they did the impossible by qualifying as the members of their nation s first Winter Olympic Team. With personal and national pride on the line these underdogs competed fiercely at the 1988 Winter Olympic Games in Calgary, Canada. The awesome foursome didn t win a medal but they won the heart of the entire world. They have taught us that we can still succeed against seemingly insurmountable odds if we believe in ourselves and say Yes, I Can! Here s to following your dream!