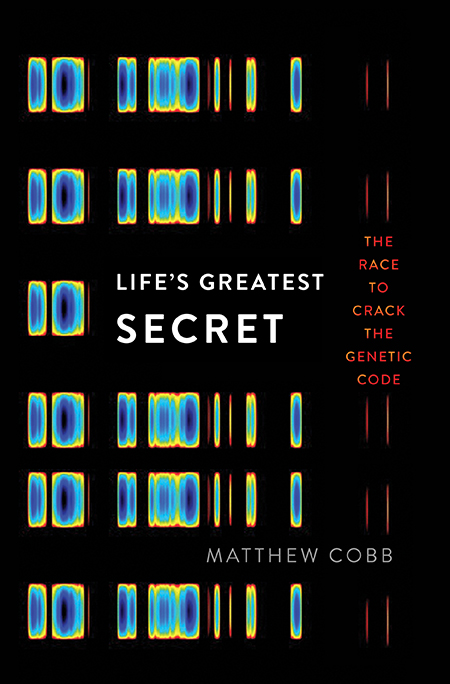 Life’s Greatest Secret is a story of ideas and of experimentation, of ingenuity, insight, and dead-ends, in the hunt to make the greatest discovery of twentieth century biology.

The Race to Crack the Genetic Code

Scientists and laypeople alike now know that our genomes contain information that can help us to interpret our evolutionary past. Just a half century ago, this idea was revolutionary. In April 1953, James Watson and Francis Crick published in Nature their groundbreaking work revealing the double helix structure of DNA. While this discovery received wide attention from both mainstream media and the academic community, it was just one part of the bigger story in this history of molecular biology. By the mid-1950s, the scientific community confirmed that genes were indeed comprised of DNA; they just needed to crack the genetic code—and the race was on. Life’s Greatest Secret is the full and rich history of this challenge and the characters—many of whom were not biologists—whose work contributed to this grand scientific endeavor: mathematician and father of cybernetics Norbert Wiener, physicist Erwin Schrödinger, information theorist Claude Shannon, and biologists Jacques Monod and Marshall Nirenberg.

In Life’s Greatest Secret, science historian and zoologist Matthew Cobb shows that the race to crack the genetic code was mostly a matter of craft—individuals or small groups struggling with ideas and concepts as much as they were with facts, trying to find the right experiment to answer the right questions, even if they didn’t know what the questions were, and finding that, even when the most definitive answer served mostly to reveal more ignorance, whether in 1953, with Watson and Crick, or in 1961, when Nirenberg and Matthaei showed how DNA codes for specific amino acids, and again and again thereafter, or in 2000, with the first publication of a human genome. Each discovery was a leap forward in our understanding of the natural world and our place within in, akin to the discoveries of Galileo and Einstein in the realm of physics, or the publication of Darwin’s On the Origin of Species. And each served to show how much bigger the problem was that anyone had previously imagined, a trend that continues, as Cobb shows, even today, whether we are discussing gene regulation, epigenetics, or GMOs.

Life’s Greatest Secret is a story of ideas and of experimentation, of ingenuity, insight, and dead-ends, in the hunt to make the greatest discovery of twentieth century biology. Ultimately, though, this is a story of humans exploring what it is that makes us human.