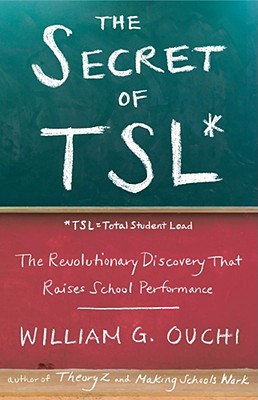 The Secret of TSL: The Revolutionary Discovery That Raises School Performance

From the author of the acclaimed and influential Making Schools Work comes Untitled on Education, a guide to the revolutionary reforms that are changing public education in some of the nation’s biggest cities.

• Based on a groundbreaking study by the author. Ouchi studied 442 schools in Boston, Chicago, Houston, New York City, Oakland, St. Paul, San Francisco, and Seattle that have embraced school decentralization. He shows how decentralization has improved school performance as measured by standardized tests.

• Explains the key to school success. Principals must be given control of their budgets and other authority. When they are empowered, they allocate funds to increase the number of teachers and lower the Total Student Load (TSL) per teacher. TSL is the key factor in school performance. Principals with autonomy invariably lower their school’s TSL.