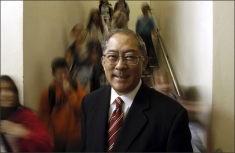 Professor Ouchi is the author of the New York Times bestseller Theory Z: How American Management Can Meet the Japanese Challenge (Addison-Wesley, 1981). Theory Z has been published in 16 foreign editions and ranks as the seventh most widely held book of the 12 million titles held in 4,000 U.S. libraries.

Professor Ouchi’s recent book, Making Schools Work: A Revolutionary Plan to Get Your Children the Education They Need, was published in September 2003 and details some fascinating research he has conducted in the area of K-12 public education. His research finds that the schools that consistently performed best also had the most decentralized management systems, in which individual principals — and not administrators in a central office — controlled school budgets and personnel. The book is based on a comprehensive study of 223 schools in six cities across North America that was funded in part by the National Science Foundation.

Professor Ouchi’s new book, The Secret of TSL, which reports on a new study of 442 schools in eight decentralizing urban districts,& was published by Simon and Schuster in September, 2009.

Appointed to the UCLA Anderson faculty in 1979, Professor Ouchi teaches courses in management and organization design, and conducts research on the structure of large organizations. A longtime civic activist, Professor Ouchi took leave from UCLA from 1993 to 1995 to serve as advisor and chief of staff to then Los Angeles Mayor Richard Riordan.

Professor Ouchi has served as co-chair of the UCLA School Management Program and is co-founder and chairman of The Riordan Programs, which foster diversity in the business community by encouraging and preparing individuals from diverse and disadvantaged backgrounds to pursue higher education and careers in management.

Professor Ouchi has served on the editorial boards of four scholarly journals and serves as advisor to several granting agencies. He serves as Chair of the Nozawa Endowment which supports students from Japan who are studying at the Anderson School. He has previously served as Vice Dean for Executive Education, as Director of the Doctoral Program, and as Area Chair for the Strategy and Organization Area of the school.

In the larger community, Professor Ouchi serves on the Board of Trustees of the Conrad N. Hilton Foundation, the Japanese American National Museum, the California Heart Center Foundation, and on the Board of Directors of The Alliance for College-Ready Public Schools - an operator of inner-city charter schools in Los Angeles. He previously served on the boards of Williams College, KCET Public Television, The California Community Foundation, Leadership Education for Asian-Pacifics, the Consumer Advisory Committee of the U.S. Securities and Exchange Commission, Walt Disney Concert Hall, and of the Harvard-Westlake School.

In the business community, he serves on the boards of directors of AECOM and Sempra Energy.