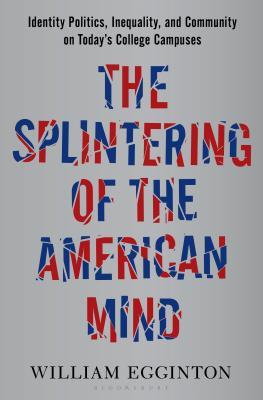 The Splintering of the American Mind

A timely, provocative, necessary look at how identity politics has come to dominate college campuses and higher education in America at the expense of a more essential commitment to equality.

Thirty years after the culture wars, identity politics is now the norm on college campuses-and it hasn’t been an unalloyed good for our education system or the country. Though the civil rights movement, feminism, and gay pride led to profoundly positive social changes, William Egginton argues that our culture’s increasingly narrow focus on individual rights puts us in a dangerous place. The goal of our education system, and particularly the liberal arts, was originally to strengthen community; but the exclusive focus on individualism has led to a new kind of intolerance, degrades our civic discourse, and fatally distracts progressive politics from its commitment to equality.

Egginton argues that our colleges and universities have become exclusive, expensive clubs for the cultural and economic elite instead of a national, publicly funded project for the betterment of the country. Only a return to the goals of community, and the egalitarian values underlying a liberal arts education, can head off the further fracturing of the body politic and the splintering of the American mind.

Prev: The Spiritualist
Next: The Starchblocker Diet