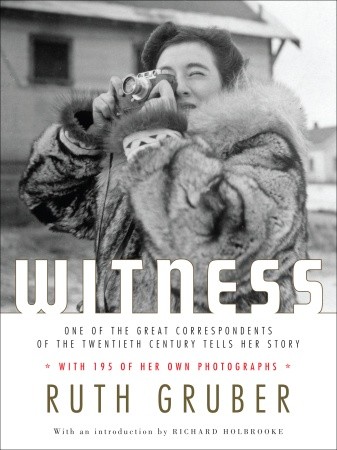 With her perfect memory (and plenty of zip), ninety-five-year-old Ruth Gruber–adventurer, international correspondent, photographer, maker of (and witness to) history, responsible for rescuing hundreds of thousands of Jewish refugees during World War II and after–tells her story in her own words and photographs. Gruber’s life has been extraordinary and extraordinarily heroic. She received a B.A. from New York University in three years, a master’s degree from the University of Wisconsin a year later, and a Ph.D. from the University of Cologne (magna cum laude) one year after that, becoming at age twenty the youngest Ph.D. in the world (it made headlines in The New York Times; the subject of her thesis: the then little-known Virginia Woolf). At twenty-four, Gruber became an international correspondent for the New York Herald Tribune and traveled across the Soviet Arctic, scooping the world and witnessing, firsthand, the building of cities in the Siberian gulag by the pioneers and prisoners Stalin didn’t execute . . . At thirty, she traveled to Alaska for Harold L. Ickes, FDR’s secretary of the interior, to look into homesteading for G.I.s after World War II . . . And when she was thirty-three, Ickes assigned another secret mission to her–one that transformed her life: Gruber escorted 1,000 Holocaust survivors from Italy to America, the only Jews given refuge in this country during the war. “I have a theory,” Gruber said, “that even though we’re born Jews, there is a moment in our lives when we become Jews. On that ship, I became a Jew.” Gruber’s role as rescuer of Jews was just beginning. In Witness, Gruber writes about what she saw and shows us, through her haunting and life-affirming photographs–taken on each of her assignments–the worlds, the people, the landscapes, the courage, the hope, the life she witnessed up close and firsthand: the Siberian gulag of the 1930s and the new cities being built there (Gruber, then untrained as a photographer, brought her first Rolleicord with her) . . . the Alaska highway of 1943, built by 11,000 soldiers, mostly black men from the South (the highway went from Dawson Creek, British Columbia, 1,500 miles to Fairbanks) . . . her thirteen-day voyage on the army-troop transport Henry Gibbins with refugees and wounded American soldiers, escorting and then photographing the refugees as they arrived in Oswego, New York (they arrived in upstate New York as Adolf Eichmann was sending 750,000 Jews from Hungary to Auschwitz). In 1947, Gruber traveled for the Herald Tribune with the United Nations Special Commission on Palestine (UNSCOP) through the postwar displaced persons camps in Europe, and then to North Africa, Palestine, and the Arab world; the committee’s recommendation that Palestine be partitioned into a Jewish state and an Arab state was one of the key factors that led to the founding of Israel. We see Gruber’s remarkable photographs of a former American pleasure boat (which had been renamed Exodus 1947) as it limped into Haifa harbor, trying to deliver 4,500 Jewish refugees (including 600 orphans), under attack by five British destroyers and a cruiser that stormed the Exodus with guns, tear gas, and truncheons, while the crew of the Exodus fought back with potatoes, sticks, and cans of kosher meat. In a cable to the Herald Tribune, Gruber reported that “the ship looks like a matchbox splintered by a nutcracker.” She was with the people of the Exodus and photographed them when they were herded onto three prison ships. Gruber represented the entire American press aboard the ship Runnymede Park, photographing the prisoners as they defiantly painted a swastika on the Union Jack. During her thirty-two years as a correspondent, Ruth Gruber photographed what she saw and captured the triumph of the human spirit. “Take photographs with your heart,” Edward Steichen told her. Witness is a revelation–of a time, a place, a world, a spirit, a belief. It is, above all else, a book of heart.​

Prev: Without the Moon
Next: Witness the Night