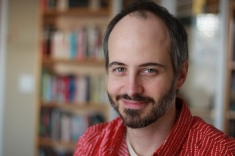 Drew Callander and Alana Harrison love to crack jokes, talk in funny voices and read aloud. Imagine their delight to discover that they could combine all these “skills” to write books together. In addition to writing books, they’ve worked as actors, improv comedians, filmmakers, animators, and puppeteers. They spent many years reading and performing kids’ original stories, which gave them the idea to invent Astorya, a world where all the wonderful weirdness of kids’ imaginations could live in one place. They hope the Mightier Than the Sword series will inspire readers to harness the power of their own creativity in our world.

At this point in an author biography, you usually find out where the authors live. We’d like to tell you where Drew and Alana live, but they won’t stay put. In the last three years, they’ve lived in three different states and three different countries. And they are still on the go. Who knows? They could be moving to your town next.

Aside from writing books together, they also have made cartoons together and written and performed many a stage show in New York City. Drew also started the theatrical phenomenon, Story Pirates. If you’re interested in name-dropping, between the two of them, they have had the good fortune to work creatively with John Oliver, Jon Stewart, Kristen Schaal, Conan O’Brien, Tina Fey, Amy Poehler, Maya Rudolph, David Wain, Michael Showalter, Michael Ian Black, Paul Rudd, and Nick Offerman. Their work has appeared on MSNBC, NBC, Sirius XM Radio and Comedy Central. You can also currently hear Drew on the hit podcast Orbiting Human Circus with Julian Koster of Neutral Milk Hotel (to drop yet another name).

Mightier Than the Sword
Prev: John Callahan
Next: Gabrielle Calvocoressi