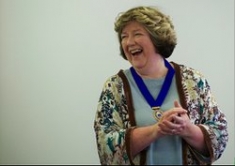 Professor June Andrews RMN, RGN, FRCN is an inspirational woman whose impact on healthcare in the UK, and further afield, is profound.

She is a refreshing force of nature - smart, politically astute, amusing and possessed of a razor-sharp intellect. A Scot, she trained as a nurse in Nottingham, England before taking up a series of posts that moved from practice to policy-making and strategic management and influencing.
As Director of the University of Stirling’s Dementia Services Development Centre, Professor Andrews makes ambitious things happen all the time: she recently conceived of a new online design guide for care homes and hospitals, ensuring wall-to-wall media coverage and heightened public and professional awareness of the practical things you can do to make life better for people with dementia.
Working to make change internationally
Not content with revolutionising dementia care in the UK, Professor Andrews is simultaneously working to make change internationally. She has worked in many countries including the Netherlands, Germany, Belgium, Switzerland, Ireland, Canada, New Zealand, Australia, the USA, Saudi Arabia and Hong Kong; she has been an adviser to the Canadian Knowledge Translation Network, and judged awards for the European Foundations in Dementia and the NHS/Design Council. In 2011 she gained recognition for her international work through the Robert Tiffany Award, and was presented in Philadelphia with the first-ever Founders’ Award of the British American Project, of which she is a Fellow and advisory Board member.
June supports other health and social care teams as a coach and mentor, and has led successful teams for three decades. Because of her considerable achievements as a nurse leader, she received the Chief Nursing Officers’ Lifetime Achievement Award in 2012.
Fellow of the Royal College of Nursing
In 2014 she was made a Fellow of the Royal College of Nursing of the United Kingdom, the highest honour that the RCN can bestow. In 2013 she was listed in the Health Services Journal as one of the fifty most inspirational women in health care and separately as one of the 100 most influential clinicians in England.