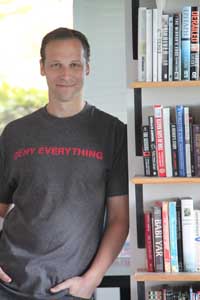 Gregg Hurwitz is the critically acclaimed, New York Times and internationally bestselling author of twelve novels, most recently Trust No One, They’re Watching, You’re Next, and The Survivor. His books have been nominated for numerous awards, shortlisted for best novel of the year by International Thriller Writers, nominated for CWA’s Ian Fleming Steel Dagger, chosen as feature selections for all four major literary book clubs, honored as Book Sense Picks, shortlisted for the Galaxy National Book Award, and translated into twenty two languages.

Gregg has written screenplays for or sold spec scripts to Disney, Paramount, Warners, MGM and many of the other major studios, and written, developed, and produced television (including ABC’s “V”) for various networks. He has also written comics for Marvel and DC, tackling characters ranging from Wolverine to Batman. He has also published numerous academic articles on Shakespeare, taught fiction writing in the USC English Department, and guest lectured for UCLA, and for Harvard in the United States and internationally. In the course of researching his thrillers, he has sneaked onto demolition ranges with Navy SEALs, swum with sharks in the Galápagos, and gone undercover into mind-control cults.

Hurwitz grew up in the Bay Area. While completing a BA from Harvard (‘95) and a master’s from Trinity College, Oxford in Shakespearean tragedy (‘96), he wrote his first novel. He was the undergraduate scholar-athlete of the year at Harvard for his pole-vaulting exploits, and played college soccer in England, where he was a Knox fellow. He now lives in L.A. where he continues to play soccer, frequently injuring himself.​