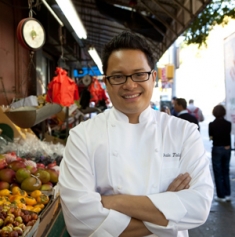 Dale Talde’s passion for cooking began at a young age in his native Chicago where he learned to prepare meals alongside his mother in the kitchen. The proud son of Filipino immigrants, he grew up immersed in his family’s cultural heritage while also enjoying the life of a typical American kid. Dale applies this distinct Asian-American experience to the menu of his eponymous restaurant, TALDE, located in the Brooklyn’s thriving Park Slope neighborhood. Dale opened TALDE—his first restaurant as chef/partner—in January 2012, and it quickly became a hit with diners and critics alike. In August 2012 he and his partners David Massoni and John Bush launched Pork Slope, a Brooklyn roadhouse serving his take on classic American bar food. In October 2012, he took over the kitchen and became a partner in Massoni and Bush’s older restaurant, Thistle Hill Tavern.

A 1998 graduate of the prestigious Culinary Institute of America, Dale began his professional career in Chicago as part of the opening staff at two of the city’s most acclaimed eateries: Chef Jean-Georges Vongerichten’s Thai-inspired, French restaurant, Vong-Chicago; and Chef Shawn McClain’s New-American restaurant, Spring. Dale followed this with a stint consulting at Le Anne, a Vietnamese bistro in Chicago’s western suburbs. It was there, he developed a true passion for Southeast Asian cuisine.

Dale later joined Chef Carrie Nahabedian at her award-winning New-American restaurant, Naha. Under Chef Nahabedian, Dale learned the value of being a “locavore” and how to build relationships with local farmers, fishmongers and butchers. While Dale was cooking dinner at Naha, he also took a position cooking lunch for Kevin Shikami at his restaurant, Kevin. The opportunity to become a Chef de Cuisine in 2003 had Dale moving on to Opera, a modern Chinese restaurant.

In December 2005, Dale moved to NYC for the opportunity to work with Chef Masaharu Morimoto and restaurateur Stephen Starr at the celebrated Japanese restaurant, Morimoto. Continuing to work with STARR Restaurants, he then joined the kitchen of Buddakan, serving as Chef de Cuisine. In 2011, Dale was named Director of Asian Concepts for STARR Restaurants, consulting on various projects and assisting with the opening of Makoto in Bal Harbour, Fla.

In addition to his work in the kitchen, Dale was also a two-time cheftestant on Bravo’s Emmy Award-winning culinary show, “Top Chef.” He competed in season 4, as well as, on the show’s “All Star” season, and became one of the show’s most popular cast members.

Dale lives in downtown Brooklyn, and when he’s not in the kitchen you can find him at the local courts playing basketball.