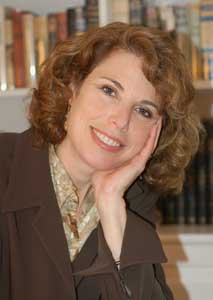 Nancy Goldstone has a passion for medieval history and old and rare books. She is the author most recently of three works of non-fiction examining the role of high born women in the Middle Ages: The Maid and the Queen: The Secret History of Joan of Arc, which unravels the mystery of the Joan of Arc by revealing the fascinating role played by Yolande of Aragon, queen of Sicily and the dauphin’s mother-in-law in her story; Four Queens, about a family of four thirteenth century sisters, the daughters of the count of Provence, who all became queens; and The Lady Queen, a biography of Joanna I, fourteenth century queen of Naples, Jerusalem and Sicily and countess of Provence, the only woman of her day to rule in her own name. Nancy has also written a number of books with her husband Lawrence, including The Friar and the Cipher, a narrative non-fiction account of the life of the great 13th century scientist Roger Bacon, and Out of the Flames, the story of 16th century theologian and physician Michael Servetus, who was burned at the stake by John Calvin, reputedly with the last copy of his book, in which he had hidden a great medical discovery, chained to his leg. She and her husband have also written three acclaimed humorous memoirs on their experiences in the world of rare and antiquarian books: Used and Rare, Slightly Chipped, and Warmly Inscribed.

The Goldstones are committed to fostering literacy and critical reading skills in elementary school children. To this end, both Nancy and Larry volunteered their time for eight years running parent-child book groups at their local library. Their book, Deconstructing Penguins: Parents, Kids and the Bond of Reading, a guide to developing reading skills in children, grew out of this program.

Nancy Goldstone graduated with honors in history from Cornell University in 1979 and received her MA in International Affairs from Columbia University in 1981. Immediately upon graduation she embarked on a hilariously brief career trading foreign currency options, an adventure which was chronicled in her first book, Trading Up: Surviving Success as a Woman Trader on Wall Street. Since that time, Mrs. Goldstone has written and reviewed for a number of publications including The New York Times, The Washington Post, The Boston Globe Magazine and The Miami Herald.

In the Shadow of the Empress

Daughters of the Winter Queen

The Maid and the Queen