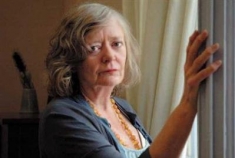 Patrice Chaplin is an internationally renowned playwright and author who has published more than 27 books, plays, and short stories. Her most notable work includes Albany Park, Siesta, which was made into a film staring Jodi Foster and Isabella Rossellini, Into the Darkness Laughing, Hidden Star, Night Fishing, and Death Trap.

As a Bohemian in Paris during the 50’s and 60’s, she spent time with Jean Paul Sartre and Simone de Beauvoir. Married to Charlie Chaplin’s son Michael and living and working in Hollywood, she was friends with everyone from Lauren Bacall and Miles Davis, to Salvador Dali and Jean Cocteau, who gave her a starring role in one of his films.

Chaplin has contributed to collections of short stories, including Black Valentine and The Minerva Book of Short Stories 1. Her plays, documentaries, and short stories have been extensively written and adapted for radio. The short story Night in Paris has been translated in many countries, and other short stories of hers have appeared in magazines and newspapers, including The Independent.

Her stage play From the Balcony was commissioned by The National Theatre in London in conjunction with Radio 3 and was performed at the Cottesloe Theatre. She has also written articles for publications including The Guardian, The Sunday Times, The Jewish Chronicle, The Daily Mail, Marie Claire, and The London Magazine.

Today, Chaplin finds herself thrown deep into the Grail culture, and at the heart of a raging new controversy about the reality of the Rennes-le-Château mystery.

Chaplin is the director of The Bridge®, a non-profit organization that leads workshops based in the performing arts as a new and unique way to help fight addiction. She resides in London and is currently writing The Garden of the Frenchwoman.