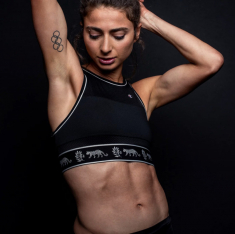 Alexi Pappas is an Olympic runner and an award-winning actor and writer. ​Alexi’s memoir-in-essays, “Bravey,” with a foreword by Maya Rudolph, was published on January 12, 2021 and was the number 1 new release in both the sports and film categories.

Alexi’s writing has been published in the New York Times, Lenny Letter, and many more. Alexi has been profiled on the cover of the New York Times Sports Page, in Rolling Stone, on NPR’s All Things Considered, and was also featured on the cover of Runner’s World Magazine’s 50th anniversary issue alongside Kevin Hart, named as one of the two faces of the “new boom” in running.