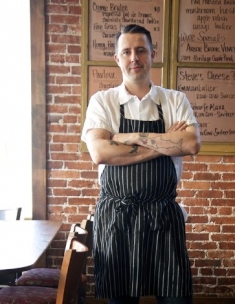 Gabriel Rucker is the Chef and Co-Owner of Le Pigeon and Little Bird in Portland, Oregon. His edgy, highly original, and recipe-free masterpieces, evocative of French bistro signatures and classic American fare, have gained him both regional and national acclaim, recently earning him a 2013 James Beard Award for Best Chef Northwest.

Gabriel’s first and favorite experience with food was at a bagel shop in his hometown of Napa during his rebellious high school days. Upon failing math at Santa Rosa Junior College, Gabriel was told he should learn a trade. Remembering a positive experience at the bagel shop, he decided to attend cooking school for a year before he dropped out after landing a job at Silverado Country Club. He then relocated to Santa Cruz for an opportunity at Southern Exposure Bistro, where he began to understand cooking intuitively. Inspired by books such as Thomas Keller’s The French Laundry Cookbook, he challenged himself to create dishes levels above lasagna.

In 2003 Gabriel left California for Oregon, where he landed a job at the esteemed Paley’s Place in Portland. A pioneer in Portland for their use of fresh, local ingredients and focus on produce from nearby farmers, he still feels lucky to have stumbled into a job there. After two years at Paley’s, he accepted a position as sous chef at the Gotham Building Tavern. There, he took straightforward American staples and retouched them with classic French technique to resounding approval.

In June of 2006, Gabriel opened Le Pigeon and quickly became an overnight success. Food & Wine Magazine aptly named him one of the country’s Best New Chefs in 2007. For four consecutive years beginning in 2008 he was nominated for The James Beard Foundation’s Rising Star Chef award, alongside a handful of the nation’s most talented chefs under the age of 30. In 2008 Le Pigeon was named the Oregonian’s Restaurant of the Year. 2011 was a year of surprises: Gabriel returned to Portland with the 2011 James Beard’s Rising Star Award in tow and became the proud father of son Augustus Lee Lightning Bolt Rucker. A year later, Gabriel received the Chef of the Year award in Portland Monthly Magazine and Little Bird was named the Oregonian’s 2012 Restaurant of the Year. In 2013, his first year of nomination in the Best Chef regional category, Gabriel returned home with the James Beard Best Chef Northwest Award. He has been featured in the Wall Street Journal, the New York Times, Food & Wine, Bizarre Foods, and StarChefs as a Rising Star.

When he’s not at his restaurants, Gabriel can be found at home, often watching San Francisco Giants games, with his son and wife Hana.