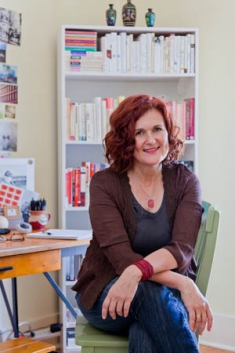 Karbo’s 2004 memoir, The Stuff of Life, about the last year she spent with her father before his death, was an NYT Notable Book, a People Magazine Critics’ Choice, a Books for a Better Life Award finalist, and a winner of the Oregon Book Award for Creative Non-fiction.

Her short stories, essays, articles and reviews have appeared in Elle, Vogue, Esquire, Outside, O, More, The New Republic, The New York Times, salon.com and other magazines. She is a recipient of a National Endowment for the Arts Fellowship in Fiction, and a winner of the General Electric Younger Writer Award.

Karbo is most well known for her best-selling Kick Ass Women series, the most recent of which is How Georgia Became O’Keeffe, published in 2011. How to Hepburn, published in 2007, was hailed by the Philadelphia Inquirer as “an exuberant celebration of a great original”; #1 ebook best-seller The Gospel According to Coco Chanel appeared in 2009. Julia Child Rules: Lessons On Savoring Life Julia Child Rules was published in 2013. Next up: In Praise of Difficult Women: Life Lessons From 29 Heroines Who Dared to Break the Rules will be released on February 27, 2018.

Karen grew up in Los Angeles, California and lives in Portland, Oregon where she continues to kick ass.

Yeah, No. Not Happening.

In Praise of Difficult Women

Minerva Clark Gets a Clue

How to Hepburn
Prev: Gary Kaplan
Next: Kassi Underwood