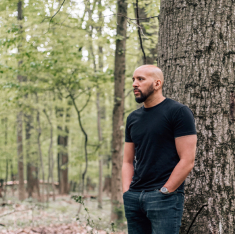 John Vercher lives in the Philadelphia area with his wife and two sons. He holds a Bachelor’s in English from the University of Pittsburgh and an MFA in Creative Writing from the Mountainview Master of Fine Arts program, and served as an adjunct faculty member at Chestnut Hill College in Philadelphia.

John’s has written for Cognoscenti, the thoughts and opinions page of WBUR Boston. Two of his essays published on race, identity, and parenting were picked up by NPR, and he has appeared on WBUR’s Weekend Edition. His non-fiction work has also appeared in Entropy Magazine, CrimeReads, and Booklist.

John’s debut novel, Three-Fifths, was named one of the best books of 2019 by the Chicago Tribune. In the U.K., Three-Fifths was named a Book of the Year by The Sunday Times, The Financial Times, and The Guardian.

Rights to Three-Fifths have been sold in France, Japan, Spain, Brazil, Germany, Mainland China, and the U.K.

In 2021, Three-Fifths was added to the curriculum of the course “Crime in American Film & Literature” at the University of North Carolina, Charlotte. In addition, Wilton High School in Wilton, Connecticut added Three-Fifths to their curated collection of titles for their 2021 town-wide reading program.

His second novel, After the Lights Go Out, will be published by Soho Press on June 7, 2022. French and U.K. rights have also been sold. You can find John on Twitter and Instagram @jverchwrites.

After the Lights Go Out
Prev: Tom Venuto
Next: Katharina Vestre