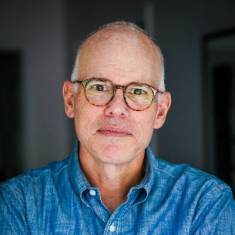 He grew up on Rodeo Drive, where he (briefly) lived next door to singer-songwriter James Taylor and was once dressed down by Bob Dylan for cussing during a Little League game.

As an undergraduate at Columbia University, he plunged into a set of subjects as far from Beverly Hills as anything he could imagine: Russian language, Russian literature, and Soviet politics.

After finishing his master’s degree at Columbia on the eve of the Soviet collapse, Weiss served in policy roles in the Office of the Secretary of Defense and on the State Department’s Policy Planning Staff. In 1998, he joined the White House’s National Security Council staff, where he advised senior members of then-President Clinton’s team on Russia policy during Putin’s rise to power.

Following a stint working in finance in the 2000s, Weiss became director of the RAND Corporation’s Center on Russia and Eurasia. His job at RAND required him to spend an inordinate amount of time studying and meeting with Russian oligarchs.

Since 2013, Weiss has led a team of world-renowned experts on Russia, Ukraine, and the surrounding region at the Carnegie Endowment for International Peace. He also oversaw the Carnegie Moscow Center, Russia’s leading independent Western-style think tank, which the Kremlin closed following Russia’s invasion of Ukraine.

Weiss was the Library of Congress Chair in U.S-Russia Relations from 2021 to 2022, and he regularly contributes analysis and articles to outlets such as The New York Times, The Washington Post, PBS News Hour, and National Public Radio.

He and his wife, Kate Julian, an editor and writer, live in the Washington, D.C. area with their two children.