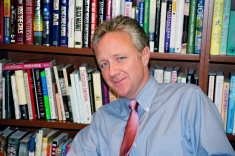 George Lucas co-represents authors in North America on behalf of a number of London literary agencies and publishers, including Profile Books. He turned to agenting in 2003 having spent over a decade as an editor, part of a seventeen-year transatlantic publishing career that had taken him from packing books in a rural English warehouse to nurturing thriller writers for towering New York conglomerates. Among many others, he represents New York Times bestselling authors Lynne Truss, Kate Mosse and Simon Garfield, Man Booker Prize winner Howard Jacobson, as well as the Literary Estate of P G Wodehouse.