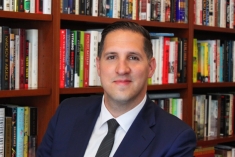 Stephen Barbara was born and raised in New Haven, Connecticut, and graduated from the University of Chicago with a B.A. in English language and literature, winning awards for writing and student leadership while at the college. He began his publishing career in 2005 as an editorial assistant at HarperCollins, and then worked for three years as the Contracts Director of the Donald Maass Agency. Following six years as a literary agent at Foundry Media, he joined InkWell Management at the start of 2015.

Film/TV is a stated area of interest for Stephen. In the spring of 2019, Amazon Studios announced their first-ever YA series, Panic, based on Lauren Oliver’s novel; two other novels
based on books represented by Stephen have been adapted into films, and many other projects based on books of his are in active development. While selective in taking on new clients, Stephen is always drawn to compelling stories that marry quality writing to bold, imaginative concepts.